There are 21 states in Brazil, 17 of which produce coffee, but four of them have the largest production, adding up to 98% of the total national production, they are: Parana , Sao Paulo, Minas Gerais and Espirito Santo. Brazil has been compared to the "giants" and "monarchs" of the coffee world. There are approximately 3.97 billion coffee trees, and small farmers now grow 75% of Brazil's total national production. Brazil has twice or even three times as many people involved in coffee production as Colombia, the second largest coffee producer in the world. 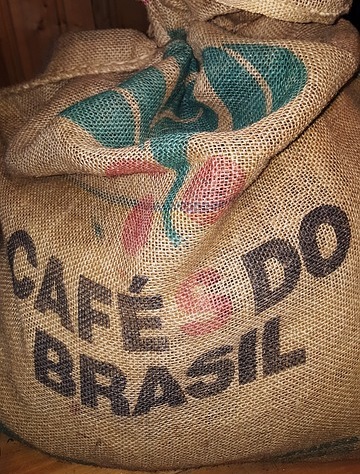 Brazil is located in the tropical region with a tropical rainforest climate, which is hot and humid all year round. The climate is suitable for sun-loving coffee trees, and the sufficient sunlight ensures a best planting environment.

Historically, Brazil has long been a Portuguese colony, and in order to meet the demand of Western Europe, it has been growing this single crop for a long time and developing a tropical plantation economy, thus Brazil's coffee has been its mainstay industry for a long period of time.

Coffee and its processed products are rich in caffeine, which has an uplifting effect, and has an important role for the working groups, so it plays a huge role in modern society. The market is vast.

The Brazilian grading system is its own independent grading system for the percentage of defects, size, flavor and taste, which is more complex than other countries. For example, in "Brasil Santos NY 2 SC17/18 SS FC", NY2 shows the percentage of defects: the larger the number, the greater the percentage of defects. The order is 2, 2/3, 3, 3/4..., NY means that the New York grading standard is used as a benchmark. Brazilian coffee beans are graded by the "deduction method", according to the number of defective beans in each 300 grams of the main beans, and there are seven levels of grades from No.2 to No.8. There is not a single defective bean can be called No.1, but this is rare and cannot maintain a certain supply, so Brazil sets No.2 as the highest level, not No.1.

SC 17/18 indicates the bean mesh size. This is a sieve size based on 1/64th of an inch, usually between 14 and 20. It is also important to note that the mesh size corresponds to the short side of the bean, the "width". In Brazil, the maximum mesh size for coffee beans is 19, but the production is not much, so 17/18 mesh is the highest grade. In Brazil, the four most common processing methods for coffee beans are: natural dry process, desizing, semi-washing and washing, with the natural solarization method being the most popular.

The natural dry process is very popular in Brazil because the harvest season in the two main production areas of Cerrado Mineiro and Mogiana Paulista is the dry season of the year. The freshly picked fruit is left to dry on the terrace, and on more modern plantations, workers screen the coffee before drying, stripping out the unripe fruit by placing all the fruit in a tank of water, where the unripe fruit floats on top of the water due to its lighter mass, and workers use siphoning equipment to remove the floating fruit. However, in the relatively backward plantations, workers do not have enough cash equipment to completely strip the unripe fruit, which is why many Brazilian sun-dried coffees have a lot of unripe beans mixed in.

The pulped natural method is the second most popular method of processing raw coffee beans in Brazil, which can also be called “honey processing”. When using this method for raw beans, a de-pulpers are essential, and the sweetness and flavor of the coffee processed using this method is extremely pronounced and unique. The de-pulpers separate the peel and flesh parts of the coffee fruit from the raw beans. After the de-pulping step, the raw beans are rinsed with water to the desired level of mucilage and then dried. The unique feature of this method is that the raw beans are not subjected to fermentation. Since a small amount of mucous membrane remains on the surface of the raw beans, the drying process must be quick in order to prevent the coffee from rotting and becoming moldy. There are 3 levels of raw coffee beans after the honey processing: yellow, red and black. The shades of color vary from the length of time the coffee is exposed to light during the drying process. Yellow coffee beans have the longest exposure to light. Longer light time means more heat, so this coffee is dried within 1 week. In general, the drying time of the coffee depends on the local climate, temperature and humidity conditions. The drying time for red beans is 2-3 weeks, usually due to weather or placement in a shaded area. If the weather is sunny, the grower shades the beans from partial sunlight to reduce the light time. The black beans take the longest to dry in the shade, and the shorter the light time. The minimum drying time for this ah coffee is 2 weeks. The processing is most complicated and labor costs are highest, making the black beans the most expensive. The semi-wash method is now a relatively outdated method of processing raw beans in Brazil, and it can easily be confused with honey processing. Semi-washed coffee is extremely rich and sweet, but it requires a great deal of skill and experience on the part of the grower, and if mistakes are made, the coffee will become unpalatable. As with the honey processing, the fruit is first de-pulped in a de-pulping machine, but the difference is that the semi-washing method requires the removal of as much of the skin and flesh as possible, as well as the mucous membrane on the surface of the raw beans. In Central America, the beans are directly washed in a washing machine after de-pulping, which is why this method is also known as the "mechanical washing method". The raw coffee beans are so clean that they are ready for drying without fermentation. The semi-washed coffee dries quickly at a constant temperature, resulting in a cleaner tasting coffee with less mold and a fruitier flavor than other slower drying coffees.

Although many Brazilian coffee growers have recently expressed a strong interest in the wash method, the demand for this coffee in the domestic and international markets is still low, due to the poor reputation of washed Brazilian coffee in the international market and the late start of water-washing technology in Brazil, which is not yet mature. The treatment of washed coffee is very similar to that of semi-washed coffee, but washed coffee requires fermentation to remove the mucilage from the surface of the raw beans. Washed coffee beans usually have a pure taste and a pleasant acidity.

What is the Relationship Between Deforestation and Soybeans in Brazil?