According to the 2020 Annual Report to Parliament on Immigration, in 2019, 5,774,342 travel documents were issued to visitors, workers and students. 404, 369 temporary work permits were issued under the temporary foreign worker and international mobility programs. 341,180 permanent residents were admitted in Canada. 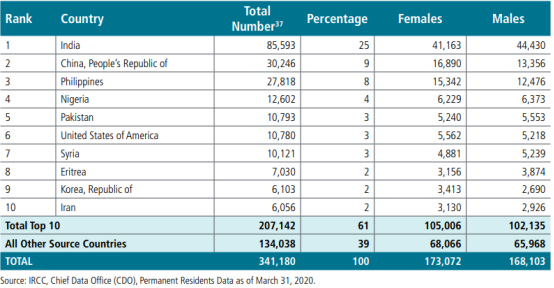 As shown in the chart above, India, followed by China and the Philippines, is the largest immigrant source of Canada, accounting for a quarter of all immigrants to Canada. The main reason for Canada's efforts to attract immigrants is Canada's demographic crisis. The total population of Canada is about 30 million, but the aging of the population is becoming more and more obvious, and the lack of labor supply in the society has led to the inability to recruit workers for many enterprises and social security, which will directly affect the normal operation and development of the whole country. According to the Canadian Census, Canada's cumulative population growth rate during the five-year period 2011-2015 was only 5%, which is less than 1% of the annual average population growth rate for the same period. According to official statistics, the ratio of working people to seniors was 6.6 to 1 in 1971; in 2012, the ratio was 4.2 to 1; and by 2036, it is expected to be 2 to 1. By 2035, five million Canadians will be retired. So Canada must attract immigrants to supplement its workforce, empower its economy, and maintain its social balance. Canada attracts immigrants who have made strong contributions to the country's economic and social development, such as investment immigrants, who are required to actually engage in a certain scale of business investment in Canada and to solve a certain number of employment problems, which will naturally increase tax revenue, foreign investment, and solve employment problems for the government; labor class immigrants, who are required to be skilled workers necessary for the development of Canadian society, such as caregivers, fishermen, and other immigrants. In addition, immigrants with experience attract high-tech, highly educated and highly qualified global talents, which can create obvious wealth for Canadian society. Therefore, attracting immigrants to Canada can effectively enhance the overall demographic structure of Canada, improve the overall composition of national quality, increase foreign investment, and so on. 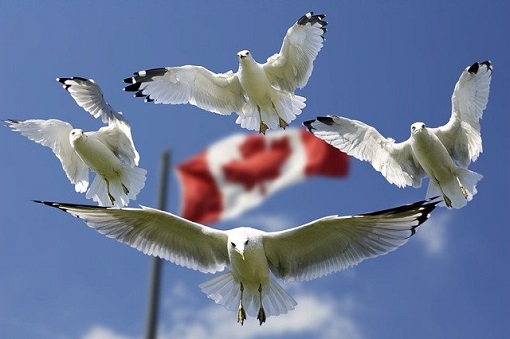 Ways to Immigrate to Canada

EE is short for Express Entry, which is an online registration system for expressing immigration intentions. Starting from 2015, The system has been used to screen Canadian skilled immigrants for Federal Skilled Worker (FSW), Canadian Skilled Worker (FST) and Canadian Experience Class (CEC). Generally speaking, the Federal Skilled Worker (FSW) is for those who have worked overseas, and the Canadian Experience Class (CEC) is for most international students studying and working in Canada. The common feature is that they need to enter the same CRS scoring system (Comprehensive Ranking System) and obtain points above the invitation scoreline in order to be invited and successfully immigrate. Age, educational background, language proficiency and Canadian work experience are the criteria for review.

Canadian family sponsorship immigrants mainly refer to family members and dependents who come to Canada to reunite with relatives who have become Canadian citizens or permanent residents and are living in Canada. There are three general categories of immigrants for Canadian family sponsorship: spouse, common-law or conjugal partner; dependent children; parents and grandparents; other close relatives.

LMIA, Labour Market Impact Assessment, is an assessment conducted by Canada's labor force to determine whether an employer has the need and ability to hire foreign nationals. It is an assessment conducted by Labour Canada to determine the need and ability of an employer to hire foreign workers. On the employer's side, Canadian employers who need to hire temporary foreign workers must first submit an LMIA application to Employment and Development Canada.

If a Canadian employer needs foreign workers to help make up for a shortage in its workforce, it can submit an LMIA application to Canada's Labour and Employment Development Agency (LDA). If approved, the LMIA can be used to assist temporary foreign workers to apply for a work visa that will allow them to come to Canada to work for the employer.

As 2020 begins, the Liberal Party's campaign promises are being fulfilled as Canada's new Immigration Minister takes office. A new immigration program, the Municipal Nominee Program (MNP), has been authorized by Prime Minister Trudeau and has been initiated by new Immigration Minister Marco Mendicino. More immigrants are encouraged to settle outside of Canada's largest cities, such as Montreal, Ottawa, Toronto, and Vancouver. 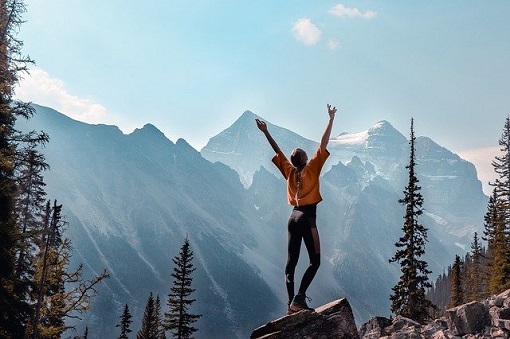 Benefits of Immigrating to Canada

In the “2020 Best Countries for Education” posted by US News, Canada is ranked third in the world, behind only the United States and the United Kingdom. The government strongly supports education, with 7.1% of GDP spent on education, the highest in the world. The education rate is 99%, and free and compulsory education covers preschool, elementary and secondary schools. Canada has some of the best universities in the world and is one of the leading countries in education investment. As a permanent resident of Canada, all fees from elementary school to high school need to be waived.

The fresh air in Canada is very suitable for people to live in. Canada has been ranked as the most livable place in the World Report on Human Development by the United Nations Development Programme for many years in a row, which is based on a comprehensive evaluation of the country's physical geography, resources and climate, environmental quality, people's living conditions, health care, social welfare, education, real per capita income and other factors.

Canadian citizens can travel visa-free to more than 100 countries around the world, and can also apply for a 10-year U.S. round-trip visa.

④ Plenty of room for development and opportunities

Canada is an economic powerhouse with the best capital, advanced technology, versatile people, and modern management. It is also the largest economy in the world, and many business entrepreneurs have made it their ultimate goal to enter the North American market, where there is plenty of room for growth and investment opportunities.

Canada's legal system is very sound, which is an advantage compared to its neighboring countries. For immigrants, social stability is the guarantee of a peaceful and happy life.

Most Suitable Areas For Buying Houses In Canada

How Long Can a Lizard Live Without Food?

A Step by Step Guide to Nerve Plant Propagation