Durian is called the king of fruits. It is a tropical fruit which native to Malaysia and was later introduced to Thailand and other Southeast Asian countries. Thailand and Malaysia are now the world's two largest durian producers.

Which type of durian is the best?

Typically, Musang King durian(Mao Shan Wang) is considered the best durian in the world. It smells and tastes more fragrant than ordinary durian.

Musang refers to the civet, which has a keen sense of smell and is good at finding the best durian. A whole, ripe durian that has fallen from a tree but hasn't split open is presented to a caged "Musang" who smells the fruit and distinguishes the good from the bad. If the civet in the cage is excited by the smell, this durian is of extremely high quality.

In 2021, the market price of Malaysia durian ranges from US$ 1.01 to US$ 1.25 per kilogram, depending on the type and sales area, the price is different. The most expensive type of durian in Malaysia may cost 5 US Dollars per kilogram.

The price of durians in Singapore is maybe a little bit higher. Ordinary durian can cost 7 to 8 US Dollars a kilo, while the price of Musang King and D24 durian may reach 20 US Dollars per kilogram.

Type of durian in Malaysia

There are hundreds of registered durian types in Malaysia. All of which are distinguished by numbers from D1 to D200, while some may have their unique name.

Musang King Durian is a world-famous durian species. Its volume is small, usually around 2.5kg. It tastes like ice cream.

The peel of Musang King Durian is mostly green. The flesh of musang King durian is golden in color, and its fragrance is much stronger than ordinary durian, which is very popular among durian lovers.

The tail of the musang king's shell must have the shape of a starfish, and each spiny must be pyramidal.

In Malaysia, Musang King durian is abundant in many regions, but the fruit quality is slightly different. Due to the influence of climate and soil, the best quality is the fruit produced in Pahang. 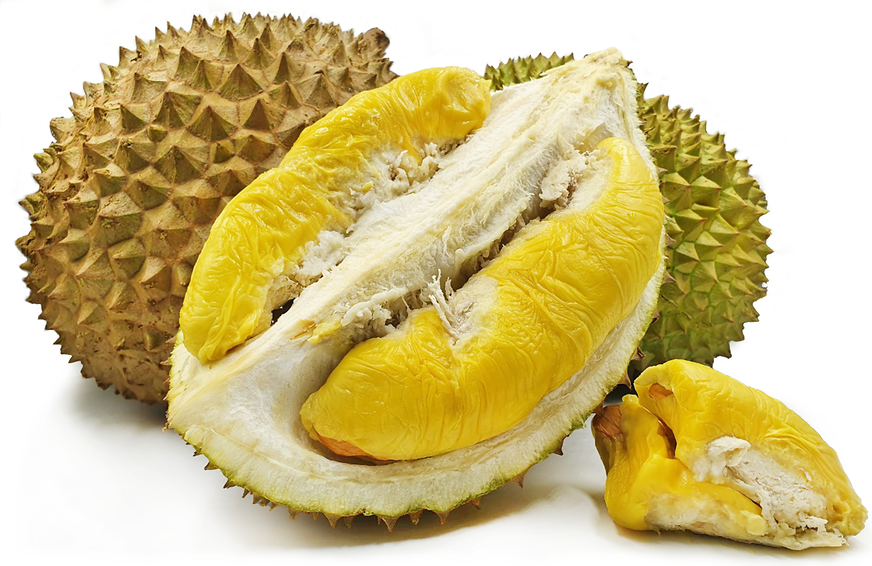 Flesh Color: Bright yellow in color
Flavor: Bittersweet, creamy texture, sticky. In the same durian, the flesh could be slightly bitter and/or sweet.
Thorns: V-shaped/pointed thorns
Crown: Thorns tend to converge at the base of the stem, forming a bald brownish ring around the stem
Shape: Oval
Base: Brownish five-pointed star.

Sultan, which is also known as Durian D24, is one of the most popular durians in Malaysia due to its rich taste. It is the most used in cake desserts up to now. Although not as prestigious as Musang King, D24 durian is still one of the most sought-after in Malaysia.

Sultan durian comes with golden, thick, and sweet flesh. The price of Sultan is affordable since it has a large stone. However, some unscrupulous vendors will take it to pretend to be the Musang King to sell. The awesome taste plus affordable pricing makes it a fierce contender for The People Choice Award. 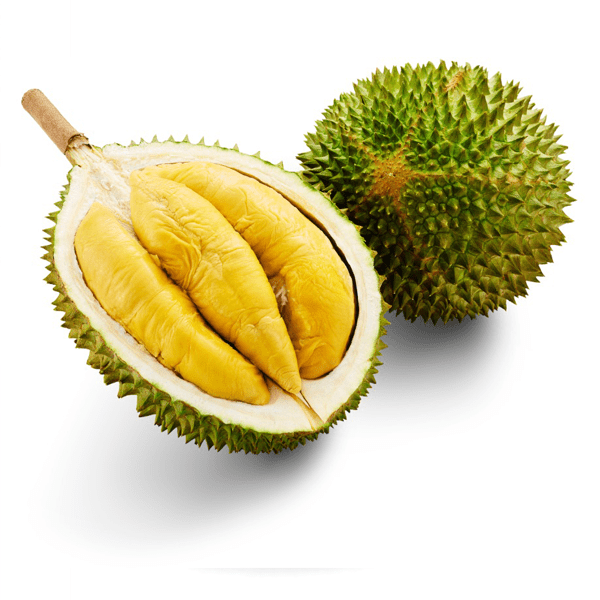 Red Prawn is a unique type of durian to Penang, and it is only available in summer. When Red Prawn is cut open, its flesh resembles two cooked prawns, so it is called "Red Prawns".

The flesh of Red Shrimp is darker than other varieties. The red shrimp has a small pit, soft flesh, almost no fiber, and a sweet taste, which is well-liked by many people. 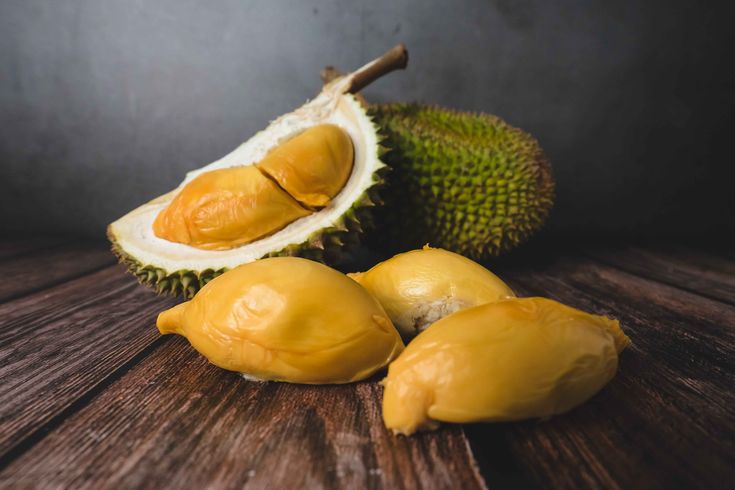 D101, called Mas, is a kind of durian with reddish flesh, green shell, and sharp thorns. A good one weighs up to two kilograms. Inferior ones can be found in hundreds of grams.

The taste of D101 is light and slightly sweet, but the flesh is sweet and smooth. Because D101 is mainly produced in Johor, it has the title of "special creamy taste of Johor".

D101 has a hint of herbal flavor. The redder the color, the more herbal it is. It is worth noting that red meat should be eaten fresh, otherwise it will be a bit sour.

XO durian, a subspecies of Sultan D24, is also common in Singapore and has a thin brown shell.

It tastes a bit like D24, which is moist on the palate. XO durian also has a distinctive alcohol-like flavor, like a French brandy. Type of durian in Thailand

Thailand's durian exports are relatively large, and China is its largest importer. The durian season in Thailand is from April to October each year.

Most of the durian in Thailand known to the market is the Monthong durian, which is characterized by triangular spikes and pale yellow flesh.

The meat is small and multi-core, and the durian smell is relatively light, suitable for durian beginners.

The Chanee durian is pear-shaped, fat in the middle, and flat at both ends. Its production is abundant and therefore cheaper than Monthong durian. But the selection of Chanee durian is a test of luck, the flavor of different origins is very different.

As ripeness increases, Chanee durian develops a slightly bitter taste, so most of what is sold on the market are not fully ripe.

Gradumtung durian is one of the first durian varieties in Thailand. Its golden flesh is not as plump as a golden pillow, but it is overweight and suitable for durian aficionados. The yield is low, and it's basically only available locally in Thailand.

Durian production is extremely rare, often used as a gift by the Thai royal family, is the world's most expensive durian, once on the auction market a dry Kanyao durian sold for 330,000 yuan. 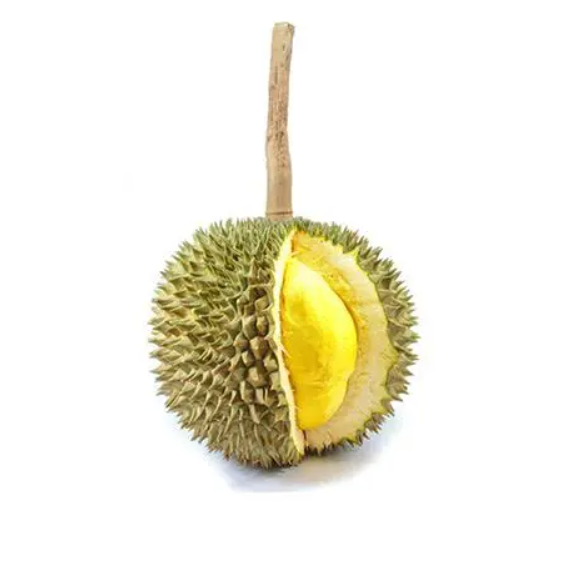 Which is the sweetest durian?

Durian is a fruit that comes in many varieties, and each variety has its own taste and sweetness. As for the sweetest variety, there is no absolute verdict. After all, everyone has different tastes and criteria for judging it.

However, Some people viewed the Red Prawn durian as the sweetest among other types due to its sweet aftertaste.