Since the beginning of this year, housing prices in many parts of the world have seen their biggest increase in 10 years, and double-digit growth rates abound. Some analysts pointed out that by 2022, the global real estate market may continue to rise, but the growth rate may moderate.

The IMF Global House Price Index shows that after the epidemic, global house prices have risen to varying degrees. On the whole, the growth rate of house prices in developed economies is significantly faster than that in emerging market economies. 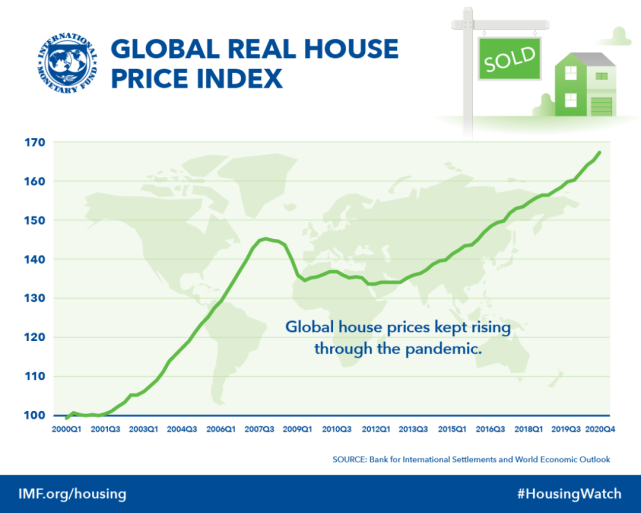 In the United States, housing construction is booming, but the supply is still insufficient, which restricts housing sales activities. Similarly, in Canada, due to strong demand and improved economic prospects, housing prices in the country's 11 major cities have experienced a two-year slowdown and have again risen strongly.

The survey also shows that the housing market in the Asia-Pacific region is heating up, with Australia, Pakistan, South Korea, Japan and New Zealand all showing obvious performance.

This round of global housing prices have risen. The reason is that large-scale government stimulus measures in many countries, imbalances in supply and demand, and rising building materials prices have all formed the driving force for the increase. Many central banks have "released water" and loose monetary policies have created a low interest rate environment. For example, at the end of last year, the Bank of Australia reduced the cash interest rate to a historical low of 0.1%, while also pressing the mortgage rate below 2%. In just one year, the median house price in Sydney, Australia has risen by 30%.

In addition, the global economic shutdown and trade suspension caused by the epidemic, the prices of bulk commodities have skyrocketed, and the prices of building materials have also risen rapidly. In October of this year, the cost of construction in the United States increased by 12.3% year-on-year, setting a record high. The shortage of construction workers and the popularization of telecommuting caused by the epidemic have pushed up housing demand and other factors have also led to rising housing prices.

Will continue to rise next year, but not crazy

Looking ahead, the global housing price growth trend in 2022 may continue.

In 2022, most areas will see positive growth in house prices, but the growth rate will be milder than in 2021. The rise in house prices is due to continued housing shortages, rising construction costs, low mortgage interest rates, and strong investor demand. Part of the reason is still housing decisions related to the COVID-19 pandemic.

However, although most of the factors of rising house prices will continue to exist in the short term, there are also factors that inhibit the excessive rise of house prices. Next year, due to the need to curb inflation, the central banks of some economies will adopt measures to tighten monetary policy, such as raising interest rates, and then pushing up loan interest rates. At the same time, pressure from high housing prices, household debt levels, and first-time home buyers’ affordability constraints will affect the formulation of housing policies. This may cause some countries to increase regulatory intervention and even restrict mortgage lending, such as Japan.

The housing market in North America, Australia, the United Kingdom, and Germany has been soaring during the epidemic year due to the surge in demand and policy support. It is expected that this wave of rising prices will continue next year, but the growth rate may slow down. After all, housing affordability is becoming the focus of attention of all countries.

The British real estate website Rightmove said that with the increase in interest rates and houses for sale, the UK real estate market may return to a more normal level of activity in 2022, but it will remain hot because strong buyer demand will continue into next year. Major British institutions predict that next year, US housing prices will not be as crazy as this year, but will continue to rise, and will not return to the normal annual growth rate of around 5% until 2023.

Of all the shortage factors that plague the US economy, the housing shortage may last the longest. US stock prices have risen by nearly 20% this year, and until now, the housing supply and demand situation has remained unchanged. Housing inventory is still historically tight. Despite recent price increases, housing is still relatively affordable. The survey of housing purchase intentions is still at a healthy level. It is predicted that by the end of 2022, housing prices will increase by 16%.