The United States has always been a hot country for real estate investment. Since the epidemic, the American currency has been issued, and real estate has become the strongest reservoir in the United States, and real estate has become the best safe-haven asset. In the past year and a half, American house prices have soared by 15-20%(NAR statistics). Chinese buyers have been in the number one position among foreign buyers in the US property market in recent years. Even though the epidemic situation and investment enthusiasm are unabated, they are still hot! So explosive, how to choose? Next, let's take a look at the four American urban areas that TLW users searched in 2021, explore their charm one by one, and grasp the current situation of the local housing market. New York, the largest city in the United States, is also the city with the largest number of Chinese in the United States (about 593,000, 2019 US Census). The bustling Manhattan, the Fifth Avenue where the top brands are concentrated, the city's Green Lung Central Park, countless Michelin restaurants ... This cultural capital of the world attracts everyone's longing for it. In addition, perfect living service facilities, scientific urban planning, humanized footpath design, numerous park layouts, etc. make new york livable. New York is also the only state with two Ivy League schools (Cornell University and Columbia University), and the first-class education level attracts Chinese people.

Be optimistic about the weather vane of the real estate market in the future.

When it comes to new york's real estate market, it can be called the vane of the American real estate market, especially the luxury residential market in Ziluo, new york. According to the data, from 2008 to the end of 2019, the top 5% of houses in the American market appreciated by 27%, while at the same time, the median price of luxury residential buildings in new york still rose by about 10% as a whole even after the adjustment in 2018-19. In 2020, the COVID-19 epidemic caught off guard, and the market didn't drop as sharply as it seemed. Instead, there was a record transaction in Manhattan: the penthouse at 421 Bloom Street sold for .14 million-the most expensive transaction in the home office area.

With the recovery of the market, the demand for classic apartments has increased. new york's buyer's market offers a 10% discount, which further fuels the situation. The volume and price of the real estate market have steadily increased, and there are many opportunities for ultra-high-end real estate.

During the epidemic, the sales and rental prices of real estate in new york declined slightly. Many high-net-worth owners moved to big houses outside the city center. What's more dramatic, some wealthy residents flocked to country villas in New Jersey or seaside villas in Hampton. Located between new york, New Jersey and Philadelphia, it is nicknamed "Garden State". The state's high-level education is obvious to all. The authoritative media The Best University of US News and World Report in 2022 The number one university in the United States is New Jersey .

In the past year, the rare real estate in New Jersey has been in short supply, and the house price has increased by 13%-16% every year (data from New Jersey real estate developers)

New york is recognized as a gathering place for luxury houses in the United States, but to find more expensive luxury houses, we may have to turn our eyes to Hampton. Hampton, a seaside town facing the Three Waters, is always crowded with the richest people from the top of new york, whether on holidays or weekends. Rich areas with rich stars have always been of great investment value. Hampton, in addition to its unique natural vacation resources, also has the high-quality school district resources of Long Island. Therefore, despite the rising real estate prices in Hampton, it still attracts international buyers from all over the world. San Francisco, the most livable city in California, has a unique charm and is one of the areas with the highest density of Chinese in the western hemisphere. About 20% of its population is Chinese, which is the highest proportion of Chinese in the American urban population (2020 US Census). San Francisco, adjacent to Silicon Valley where famous enterprises gather, is one of the regions with the strongest economic strength in the United States.

Real estate in San Francisco is even more bullish in the American apartment market, with an astonishing 40% of the length, the highest among major cities. And in the current good time of buying at a low-interest rate, the housing price is high, the inventory has been exhausted, and buyers begin to pay attention to large-scale high-end apartments. The following two classic luxury landscape mansions in downtown San Francisco only cost about 220 ten thousand dollars . 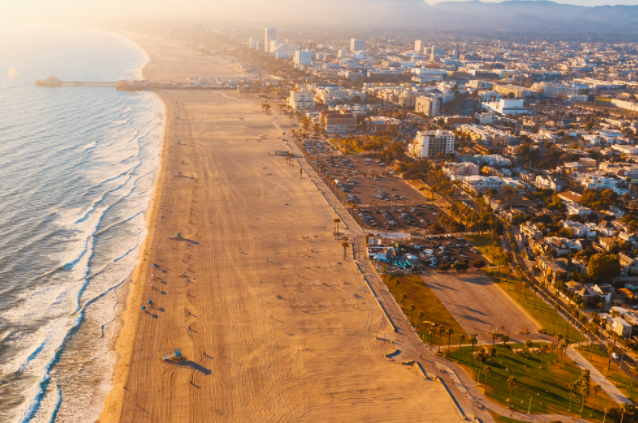 Los Angeles is the second-largest city in the United States after new york, and it is firmly in the top spot of the city most suitable for Chinese immigrants. The environment here is beautiful, the climate is mild, the status of Chinese in the city is relatively high, and the restrictions are relatively small. There are many Chinese communities, and there are naturally many opportunities to use Chinese. It is very convenient to find a Chinese restaurant to eat at. Los Angeles has a developed economy, which is the financial center second only to new york, with many employment opportunities. It brings international culture to Los Angeles, and there are more than 10 amazing beaches around it so that you can have a leisurely vacation on the seashore of "endless summer days" all year round! Orlando, Florida, the "Sunshine State", is one of the best places to visit in the minds of Americans and a leisure resort in North America. Orlando, with numerous tourist attractions and amusement parks, is a happy paradise for children, a good holiday choice for young people, and a hot spot for many elderly people to support their old age. The annual average temperature is 23℃, which is suitable for traveling all year round. You can go swimming in the water for 10 months in a year, and there are numerous unique play items. Orlando is really a place that people can't forget!

Then "no return". How about "no return"? Obtaining the right of abode through investment, the EB-5 program in the United States is the most popular immigration program that provides green cards. According to the report, those high net worth individuals who come to Florida for the winter mainly from Western Europe and Canada will consider seeking a more permanent migration plan in 2021. What about you?

These top-class cities in the United States that people are searching for are both suitable for investment and residence- Don't compare, your heart is better than action, and realize your American dream! Under the current international situation, the existence of high-quality real estate in the United States is like hard currency, which provides a strong guarantee for the preservation and appreciation of your assets, and at the same time helps you to easily integrate into the free country and enjoy a comfortable and happy life.